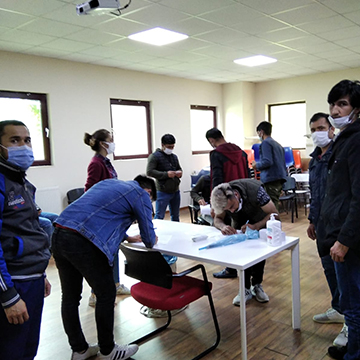 In the context of the KIKA Program implemented in cooperation with the International Labour Organization Turkey Office under the project “Decent Work Opportunities for Refugees and Host Communities in Turkey” funded by the U.S State Department of The Bureau of Population, Refugees, and Migration (PRM),

On 2nd June, United Work organized a job interview day at European operated in Eskişehir as one of its project implementation cities.

More than 50 non-Syrian refugee job seekers who aim to get a decent job met the representatives of the company which is one of the leading players in Turkey’s glass industry.At the end of the day, 15 Non-Syrian refugees namely International Protection Status Holders signed the job contracts for their first formal job experience in Turkey.

United Work Reintegration and Employment Services is a private employment office licensed by Turkish National Employment Agency (İŞKUR) under Turkey Business Council dated by 01.11.2019 decision No. 821917 according to the license No.1042 operate in Istanbul, from the date of 11/01/2019 to 13/01/2022. By law numbered 4904, it is illegal to accept and kind of fee from job seekers. Any complaints may be directed to the relevant authorities via below mentioned phone numbers. Istanbul Provincial Directorate of Labor and Employment Institution: 0212 249 29 87 -Istanbul Provincial Directorate of Labor and Employment Institution Sisli Service Center: 0212 291 09 25